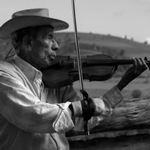 Don Plutarco, his son Genaro, and his grandson Lucio live a double life: they are humble rural musicians, who also support the campesino peasant guerrilla movement against the oppressive government. One afternoon, they come home to discover the army seized their village. Plutarco plays up his appearance as a harmless violin player to get into the village and recover the ammunition hidden in the corn field. His violin playing charms the army captain, who orders Plutarco to come back daily. Weapons and music play a tenuous game of cat-and-mouse that ultimately results in painful betrayal. Winner of three 2007 Ariel Awards, including Best First Feature. “One of the most amazing Mexican films in many a year”—Guillermo del Toro, director of Pan’s Labyrinth.
Official Website
This event page has been viewed 849 times.
bid=||