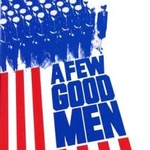 Aaron Sorkin's gripping military courtroom thriller about a young marine, apparently unfit to endure the physical rigors of Marine duty, who died. Was it an accident, or were the circumstances of his death more sinister? Two marines in his unit are indicted for a variety of charges including murder. Their only defense against the prospect of long prison terms is mounted by their Marine attorneys, Lt. j.g. Daniel Kaffee (himself the son of a revered military attorney) and Lt. Cmdr. Joanne Galloway, neither of whom has successfully mounted a criminal defense in a courtroom before. It will take all their intelligence, skill and perseverance to fight a sadistic military cult within the walls of Guantanamo Bay if Kaffee and Galloway are to win their clients’ liberty and prevail against those who would subvert the Constitution and stain the honor of Marines stationed throughout the globe who serve America with courage and distinction.
Official Website
This event page has been viewed 808 times.
bid=||