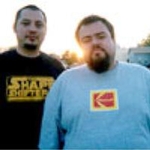 While some would argue that there is nothing better than seeing a DJ get busy on the ones and twos, others may feel that the epitome of real hip-hop is when an emcee is able to have you hold on to his or her lyrics as tightly as he or she grasps the microphone. Like most things, this is a win-win situation where both sides are right. On Friday, hip-hop heads and general party enthusiasts will have a chance to see what happens when underground hip-hop vets from both crafts come together on one stage. 2Mex (Visionaries, along with nearly countless other crews and affiliations) and AWOL ONE will be providing their version of what underground hip-hop is all about. What exactly does their version consist of? While a 2Mex show can best be characterized as highly intense lyrics meeting highly energetic stage presence, AWOL ONE is far more calculating, methodical and atmospheric in his delivery. The result is nothing short of an incredibly entertaining and engaging hip-hop experience. With I & I, Grinch, Wretched Earth, iota_arcane and Black Coral Nation also on the bill, expect an evening filled with raw cuts both by the wax technicians and the emcees that are performing alongside them. With DJ Troops serving as host, do not expect an evening filled with dull moments. This looks to be a nonstop party that will surely have those in attendance appreciating the DJ and MC equally. 21+. - Jason Kordich
Official Website
This event page has been viewed 979 times.
bid=||