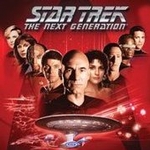 Select theaters will show two of the most popular Next Generation episodes: Ep. 106, “Where No One Has Gone Before” and Ep. 114, “Datalore.” Painstakingly re-transferred from the original source material during its ongoing multimillion-dollar restoration, this special anniversary event also celebrates the release of Star Trek: The Next Generation – The First Season Blu-ray on July 24. In addition to the two episodes—which will be introduced by well-known Star Trek experts and restoration consultants Mike and Denise Okuda—fans will also be among the first to get a glimpse of the brand-new special features, including interviews with the team behind the restoration, as they discuss the process and countless man-hours dedicated to the upgrade of The Next Generation.
Official Website
This event page has been viewed 792 times.