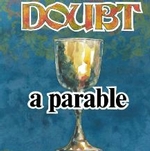 The 2005 Pulitzer Prize for Drama and Tony Award for Best Play tells the story of a nun in a Bronx Catholic School in 1964 who suspects a popular priest of inappropriate behavior with a student. Armed with nothing more than a resolute belief in her suspicions and a few circumstantial details, Sister Aloysius instigates a campaign to remove Father Flynn, the beloved and progressive parish priest, from St. Nicholas School. She enlists the help of Sister James, a young nun in the order, and the child's tormented mother, Mrs. Muller.
Official Website
This event page has been viewed 658 times.