The Who: Quadrophenia--Can You See The Real Me?: The Story Behind The Album 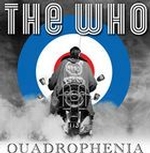 Select theaters will show this in-depth, behind-the-scenes look into one of rock’s most influential bands and the creation of their celebrated album. Packed with never-before-seen stories, including the well-known onstage collapse of Keith Moon during the tour’s first show, the evening will also feature additional performances of songs from Quadrophenia including chart topper, “Love Reign O’er Me.”

Official Website
This event page has been viewed 799 times.
bid=||