An Evening with Syfy's Eureka 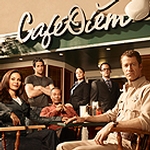 For five acclaimed seasons, Syfy’s Eureka has captivated audiences with its quirky and inventive take on an everyman sheriff of a Pacific Northwest town inhabited by brilliant scientists working on top-secret projects for the U.S. government. After the screening of a new episode and a preview of the series finale, there will be a conversation with members of the cast and creative team.
Official Website
This event page has been viewed 740 times.