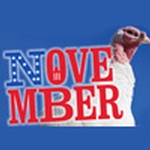 The end of the line for an unpopular president is the inauguration of hilarity when Pulitzer Prize winner David Mamet (Glengarry Glen Ross, American Buffalo, Race) makes the Oval Office a three-ring circus of political incorrectness. President Charles Smith is desperate to be re-elected. And he’s not afraid to beg, bargain or sacrifice the remains of his integrity to achieve this. The only question is: will he save the turkeys or marry the lesbians? The answer is classic Mamet.
Official Website
This event page has been viewed 853 times.