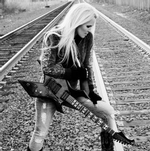 One of two solo stars to spring from the ashes of the '70s all-girl hard rock band the Runaways, Lita Ford has long been a more frustrating, contradictory proposition for critics than former colleague Joan Jett. Ford is subtly feminist in her musical approach, displaying guitar heroics on the level of any male metal hero; the mere fact of her existence in the otherwise testosterone-driven heavy metal genre has made her a hero to some, but her persona has often been criticized as calculated to appeal to male adolescent sexual fantasies, simply embodying the standard wild-girl stereotypes of many male metal artists' lyrics.

Official Website
This event page has been viewed 851 times.
bid=||