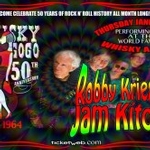 Krieger played in bands with friends, and eventually bumped into a drummer he’d met a few years before, John Densmore. The two began jamming on blues together, while Krieger’s interest in Indian music and culture continued to flourish, as he began dabbling with sitars (studying at the Kinnara School, which was founded by Ravi Shankar), and attending meditation classes. It was at one of these meditation classes that Krieger met keyboardist Ray Manzarek. Manzarek eventually convinced Krieger to come down and rehearse with a poet/singer he’d been working with, Jim Morrison. Their first rehearsal supposedly resulted in the playing of “Moonlight Drive,” resulting in the birth of the Doors.

Official Website
This event page has been viewed 815 times.