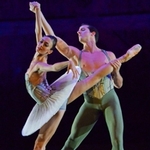 Now with a permanent residence in Chicago, namesake of the late Robert Joffrey, the Ballet has a long list of "firsts" including the first dance company to perform at the White House, the first to appear on television and the first and only dance company to appear on the cover of TIME magazine. Although The Joffrey Ballet has been a force for over a half century, it is still one of the most sought after companies in the world today.

Official Website
This event page has been viewed 899 times.
bid=||