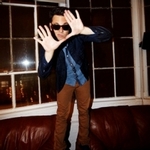 Outasight has toured with the likes of Cobra Starship, 3OH!3, The Dirty Heads, T-Pain and Gym Class Heroes and his performance at 2012’s Lollapalooza led Billboard to note, “The BMI stage has been known for finding hitmakers early; like pre-‘Just Dance’ Lady Gaga in 2007 and Ke$ha in 2009. With electro-pop tracks like ‘Tonight Is the Night’ and ‘Now or Never,’ (the latter being his best live track of the set), it may not be long before BMI can brag about Outasight playing their stage first.”
Official Website
This event page has been viewed 711 times.
bid=||