An Evening with David Fincher 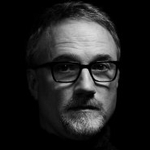 Director David Fincher is best known for his feature film work, which includes The Social Network and The Curious Case of Benjamin Button (he received Best Director Oscar nominations for both). His introduction to television drama is the U.S. adaptation of the BBC miniseries House of Cards, produced exclusively for Netflix. The conversation is followed by a screening of the first two chapters of House of Cards.

Official Website
This event page has been viewed 781 times.
bid=||