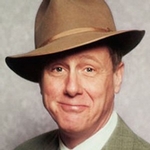 Best known for the role of Judge Harry Stone on the 1984-1992 television series Night Court, in addition to eight appearances on Saturday Night Live between 1981 and 1985, Anderson had a recurring guest role as con man "Harry the Hat" on Cheers, toured extensively as a magician and did several magic/comedy shows for broadcast, including Harry Anderson's Sideshow (1987).
Official Website
This event page has been viewed 725 times.
bid=||