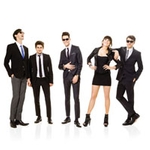 I don’t care what anyone says, even the band themselves, there’s no guilty pleasure attached to this band. Ironic pleasure maybe, but no guilt. The band is way too in on the joke for there to be any guilt about their lyrical content, stage presence or frontman Gabe Saporta’s fashion choices. But just to be clear, the fact that there’s a joke at all isn’t to say this isn’t worthwhile music by any means. Saporta and his band mates are all skillful musicians who each have their own unique charisma they bring out while performing, making them one of the most visually engaging acts around right now. Never hesitant to be interactive with his audience, Saporta will stop at nothing to get any audience he’s in front of moving, whether it’s in the tiny clubs of Hollywood for a headlining show or the giant dirt fields of Pomona for a midday Warped set. The fact that he’s effortlessly successful at that in either setting should adequately explain why there’s no guilt with listening to Cobra. Also, get round two with the Friday Night Boys here, in case you haven’t already gotten your fill of bands writing songs about MySpace scene queens and whatnots. - Brien Overly

Official Website
This event page has been viewed 1203 times.