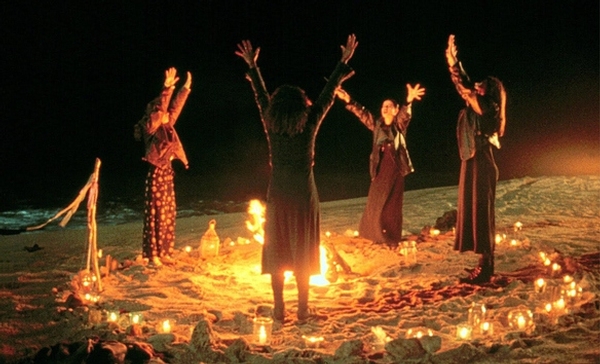 About the invocation scene on the beach, Sony Pictures' Web site (at the time the film was featured) wrote: "The crew had to return to the location a second time to complete filming interrupted by several weird occurrences that even caused witch consultant Pat Devin to raise an eyebrow. As the fog rolled in at midnight, the four actresses used actual Wiccan rites and language to invoke powerful forces. Then, as Fairuza Balk's character Nancy attempts to invoke the deity Manon, a flock of bats hovered over the set and the tide rose dramatically, extinguishing the circle of candles. Witchcraft consultant Devin recalls that 'Manon, a fictitious creation for the film, sounds very close to Mananan, the Gaelic god of the sea. Luckily, we weren't all swept to sea!'" The Web site quotes director Andrew Fleming: "'Every time the girls started the ceremony, and only when they would start the ceremony, the waves would start coming up tremendously fast, pounding heavily. Then, right when Nancy says her line, "Manon, fill me," right at that exact moment, we lost power. It was a very strange thing.'"

Official Website
This event page has been viewed 868 times.
bid=||