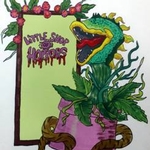 The musical opened off-Broadway at the Orpheum Theatre in Manhattan's East Village on July 27, 1982. The production was critically acclaimed and won several awards including the 1982–1983 New York Drama Critics Circle Award for Best Musical, the Drama Desk Award for Outstanding Musical, and the Outer Critics Circle Award. The production ran for 5 years. When it closed on November 1, 1987, after 2,209 performances, it was the third-longest running musical and the highest-grossing production in off-Broadway history.

Official Website
This event page has been viewed 1305 times.