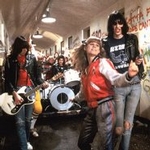 The high-school was portrayed by the non-operational Mount Carmel High School in South Central Los Angeles which had been closed-down since 1976. The building of the school blown-up at the end is the school which was scheduled for demolition. The explosion was five times bigger than it was supposed to be, and since the filming was at 3am, a lot of frightened neighborhood residents charged out of their homes, not knowing what had happened. At Montebello City Park.

Official Website
This event page has been viewed 798 times.