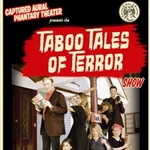 Captured Aural Phantasy Theater will be showcasing live performances of stories pulled from vintage, mid-century horror comic books presented in their signature variety show / old radio show style. These aren’t heart-warming tales – these are the comic book horror stories that were banned in the 50s for being too terrifying, too violent and too much! Along with multi-media comic book performances, the evening includes comedic acts, prizes and live music.
Official Website
This event page has been viewed 613 times.