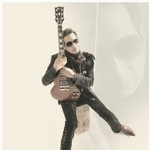 Assuming you haven’t used the entirety of your tissue supplies already after the City and Colour show, Thrice frontman Dustin Kensrue will see to it that all leftovers get put to good use at his shows. One of precious few lyricists and vocalists who is on par with Green’s musicianship and writing ability, Kensrue can do the in-song emotional catharsis with expert precision for maximum effect. When backed by his fellow Thrice band mates, however, Kensrue is just as capable of taking a more pointed look at culture and society, bringing both the intimate and the big picture together effortlessly. Guitarist Teppei Teranishi, bassist Eddie Breckenridge and drummer Riley Breckenridge are unparalleled when it comes to breathing life and emotion into their instruments, all three of which make up equally integral parts of the Thrice secret formula. What’s even better is that on top of their skill, the dudes also have killer taste in opening acts, having opted to take out Moving Mountains and O’Brother for this run. The New York natives of the former will fill your quota of gritty post-punk tinged art-rock and are masters of creating a visceral sonic atmosphere. The Atlanta natives of the latter will bring a little more folk-y ambience to the stage, painting an aural landscape of the south like Ansel Adams fronting his own indie band. So, suffice to say, all senses are going to be on overload at this show, not just your ears. - Brien Overly
Official Website
This event page has been viewed 1203 times.