"Love Actually Live" at The Wallis 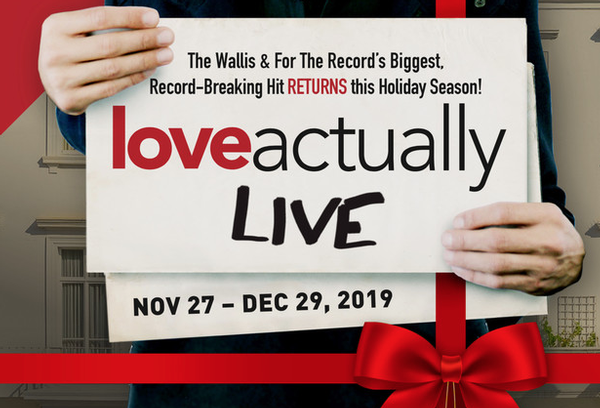 The Wallis & For The Record’s biggest, record-breaking hit returns this holiday season! The multimedia concert celebration of one of the most beloved holiday films of all time is back by popular demand, now as a not-to-be-missed Los Angeles tradition.mThe team behind LA’s award-winning series For The Record transforms The Wallis’ Bram Goldsmith Theater into an immersive cinema, where the modern classic written by Richard Curtis is reborn as a revolutionary stage and screen event. To tell the story, the film and live action seamlessly intertwine throughout the London setting. Iconic scenes on screen share the stage with an all-star cast of singers and a 15-piece orchestra, as they reimagine the film’s hit soundtrack including “Christmas is All Around” and “Trouble With Love." Love Actually Live is a first-of-its-kind, theatrical cinema experience.

“Pitch perfect! Such a celebration of love, the holidays, and the movie itself that it’s hard to not fall in love, actually.” – Entertainment Weekly
“Love Actually Live delivers! Let this superbly mounted musical wash over you with warmth and joy.” – Los Angeles TimesRunning

Time: 2 hours and 30 minutes, including a 15-minute intermission. WARNING: This production features theatrical haze effects, adult content, and brief nudity. It is recommended for ages 13+.

Official Website
This event page has been viewed 128 times.