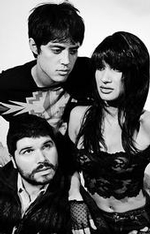 When I think of the whole dance music shtick, I hate to say I’m a slave to some of the stereotypes, but the mental images that most frequently come to mind are the bottle-blonde pop princess remixed by a hip-hop mogul and the more artsy, glitter-and-asymmetrical-hair, indie types. Really, the only differences between the two are that one knows how to play a keyboard and exposes the necessary amount of leggage via a mod-styled retro miniskirt, while the other can afford having other people who know how to play a keyboard and achieves maximum leggage via leather booty shorts. Two sides of the same coin? A debate for a different day. For now, I’ll just say it’s refreshing to see an act that can make music that’s dance-able without being mindless or campy and can infuse a dark sexiness that doesn’t cross over into trashy territory, all while challenging more than just the aforementioned stereotypes. But then, I’d expect no less from a grouping of Hercules and Love Affair collaborators. - Brien Overly
Official Website
This event page has been viewed 919 times.