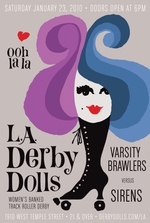 The L.A. Derby Dolls, Southern California’s premiere women's banked track roller derby league, revs up for a new year of crashes and smashes.  Both teams are hungry for a win, but only one will begin the season undefeated. The Varsity Brawlers premiered last season and gained steadily throughout, acquiring hot new skaters and working well together to defeat the Fight Crew and finish the season strong. Captain Long Island Lolita returns with new co-captain Eire Vengeance, ready to coach their team to victory over the Sirens, led by new captain Killo Kity and co-captain P.I.T.A. This police force is ready to bounce back after a tumultuous 2009 season and prove last year's losing season was just a fluke. Both teams ended 2009 at 1-3 and want to start the new year off strong. They will stop at nothing to win, promising that the 2010 Derby Dolls season will start with a bang and some pain.
Official Website
This event page has been viewed 785 times.