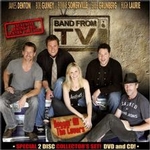 Loehmann's will celebrate the opening of its new Costa Mesa store by hosting a special concert featuring ‘Band From TV’ in front of the new store in Metro Pointe Center. ‘Band From TV’ members will include Greg Grunberg and Adrian Pasdar from NBC’s “Heroes”, Jesse Spencer from FOX’s “House”, Bob Guiney from ABC’s “The Bachelor” and Scott Grimes from NBC’s “ER”, along with a dozen other musicians and vocalists.
Official Website
This event page has been viewed 1199 times.