RFK: The Journey to Justice 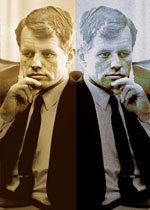 A behind-the-scenes story of a high-stakes political drama that dared the country and its citizens to look into the mirror -- and change. Robert Kennedy had an early mistrust of Dr. Martin Luther King and his tactics, but became one of the civil rights movement’s greatest champions. Through Kennedy’s transformative experience the victories, and defeats of that era are retold for a new generation. Commissioned by L.A. Theatre Works and a collaboration of university arts presenters including Stanford and Notre Dame.

Official Website
This event page has been viewed 954 times.