A Tribute to Roger and Julie Corman 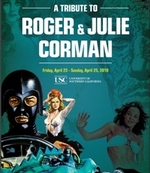 The USC School of Cinematic Arts will honor New Horizons & New World Pictures founders Roger and Julie Corman with an award for their careers as producers, mentors and visionaries, alongside screenings of many of the films that they are most celebrated and remembered for. A sampling of those who worked for the Cormans or appeared in their films include James Cameron, Frances Ford Coppola, Martin Scorsese, Jonathan Demme, Ron Howard, Tobey Maguire, Jaime Lee Curtis, Jennifer Love Hewitt, Sandra Bullock and many others.
Official Website
This event page has been viewed 865 times.