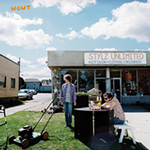 MGMT's first album, Oracular Spectacular, was named the 18th best album of the decade by Rolling Stone magazine and was named the best album of 2008 by NME. MGMT was nominated for the 2010 Grammy Award for Best New Artist, and their track, "Kids," was nominated for Best Pop Performance By a Duo or Group with Vocals, while at the 2009 Grammy Awards, the Justice remix of "Electric Feel" won the Grammy Award for Best Remixed Recording, Non-Classical.
Official Website
This event page has been viewed 1068 times.