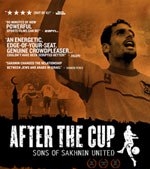 Browne, director of "After the Cup: Sons of Sakhnin United," discusses his film with Hanna Elias, a native of Sakhnin and the director of "The Olive Harvest." After The Cup tells the story of a soccer team that couldn't create a new Middle East, but showed the world what it could look like. Fielding Arab, Jewish and foreign-born players, owned by an Arab, and coached by a Jew, Bnei Sakhnin's success has begun to represent a symbol of coexistence, a potential bridge between Arabs and Jews in Israel.
Official Website
This event page has been viewed 851 times.