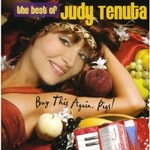 Judy is a triple threat in the sense that she has strong stage, television, comedy and film credits with a large fan base and has made hundreds of guest and co-hosting appearances on such popular TV shows as "The View," "Late Night with David Letterman," "Larry King Live," "Entertainment Tonight," and "Comics Unleashed." Judy's stand-up routine is appropriately described as outrageous, mind-blowing comedy. A strong advocate for the gay community, children and women's issues, the fun-loving feminist preaches that all women should be worshipped as "Love Goddesses."

Official Website
This event page has been viewed 1015 times.