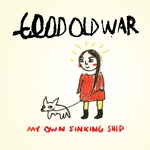 I can’t explain it, but something about listening to this band makes me want to grow a full beard, jump on a horse and go have cowboy adventures through the Midwest and/or South. Or … something. It just seems like the right thing to do to have some kind of exploratory adventure of self-discovery and foiling of corrupt villainy while listening to this kind of lo-fi indie-folk. Picture every role Timothy Olyphant has ever played, and that’s what Good Old War is the soundtrack to. Meaning that, yes, Good Old War is indeed the soundtrack to general awesomeness. Now that I think about it though, the weather is getting kind of hot now. Does it still count as an Old West adventure if I wear cowboy boots while driving through at Taco Bell and playing these guys’ album in my air-conditioned car? - Brien Overly

Official Website
This event page has been viewed 1011 times.