A Loss For Words 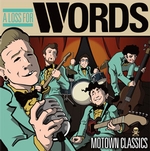 Since I’ve apparently been all about thematic cohesiveness these last many weeks, I shouldn’t be surprised that I seem to have subconsciously continued that trend this week. In case you haven’t guessed it already, this week’s theme is “Retro Inspired.” It’s not unlike the weekly theme changes on “American Idol,” except the people I showcase actually know how to sing, play instruments, perform and write music. Zing. Point being, what better way to close this week’s Frequency than my favorite Bostonian pop-punk kids … who just put out an album of Motown covers. Motown covers that are done really, really well. Like, this season’s “American Idol” finalists wished they could sing Motown this awesomely during theme weeks. When they’re not covering songs older than they themselves are, however, the fivesome have some equally as awesome songs of their own in their repertoire. A throwback to more recent times, when pop-punk was actually still punk music at the core of its being instead of Pro Tools tutorials in song form, these guys never fail to bring the rock with their yell-along anthems. - Brien Overly

Official Website
This event page has been viewed 1127 times.