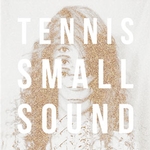 I love that these guys are playing big venues these days, despite a seeming lack of major media attention on them. The New Jersey indie rock natives have been making music for a long time, probably much longer than you think, and that skill level shows through in their musicianship. Their new self-titled album is some of the catchiest sing-along indie rock you can jam to without feeling the slightest bit guilty. If there’s one thing I have a huge weakness for in songs (outside of female vocalists, that is) it’s gang vocals, and Steel Train delivers on that abundantly. So, of course, I’m stoked. While still feeling raw and stripped down, each of their songs still carries a big-sounding, anthemic weight because of all the instrumental layers in each song and frontman Jack Antonoff’s signature sing-along vocals. And despite both the El Rey being a rather large venue and just how much the band has going on sonically in their songs, Antonoff is one of few vocalists who can make even big theater and festival venues feel like the smallest, most intimate of Hollywood dive bars. These dudes have been playing music together for a long time, and the skill level that shows through in their live set will reaffirm why they really are one of the best bands not on your TV or radio right now. - Brien Overly
Official Website
This event page has been viewed 882 times.