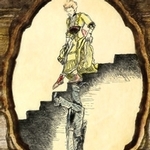 In a dark, cramped kitchen just off the servants' quarters of a nobleman's vast estate, a war has broken out between a servant and a mistress. August Strindberg's timeless masterpiece, which examines the intersection of power, sex, class, and madness, was so controversial, it was banned in its native country when it was initially written, for dealing with themes of lust vs. love.

Official Website
This event page has been viewed 815 times.
bid=||