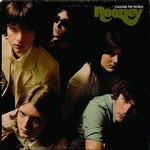 Man, whatever happened to these guys? I didn’t even know they had fallen into obscurity, and then one day this year they had a new video, prompting the realization that I probably hadn’t thought about the band in years. Rooney was one of those “it” bands emerging out of Los Angeles’ indie scene that had long been untapped by mainstream markets, and even though they were leading the pack once it did start to break, their time in the spotlight was short-lived. Now, in the name of journalistic research, I went and caught up on all the Rooney I had missed over the years, and despite how much they’ve evolved stylistically over the years, they’re still as infectiously catchy as ever. Slightly more pop-friendly, yes, but these guys can write a pop jam like nobody’s business. And maybe most importantly, they all have better haircuts these days too. - Brien Overly
Official Website
This event page has been viewed 966 times.