Debbie Does My Dad 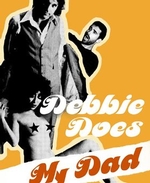 Performance artist Bobby Gordon uses spoken word theater to tell the bawdy and beautiful story of his experiences growing up as the son of a former adult film star. Gordon’s father, Howie Gordon (Stage Name Richard Pacheco) won Playgirl Man of the Year Honors in 1979 and appeared in over 100 pornographic titles. Having spent his childhood “in the shadow of his dad’s erection” Gordon dives into his experiences dealing with overly excited friends, meeting (or really failing to meet) unreasonably high expectations from female classmates in school, and ultimately works to redefine manhood for himself.
Official Website
This event page has been viewed 1339 times.