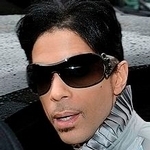 He's won 7 Grammys, a Golden Globe and an Academy Award. He was inducted into the Rock and Roll Hall of Fame in 2004, the first year he was eligible and in that same year, Rolling Stone ranked Prince #28 on its list of the 100 Greatest Artists of All Time.

Official Website
This event page has been viewed 1058 times.
bid=||