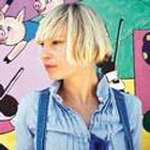 The Australian pop singer and songwriter who won the award for Best Music DVD and was nominated for Best Breakthrough Artist Album at the 2009 ARIA Music Awards. She received six nominations at the 2010 ARIA Music Awards and won Best Independent Release, Best Pop Release for We Are Born and Best Video for the song Clap Your Hands. Sia has also collaborated and performed with Zero 7 and Christina Aguilera.
Official Website
This event page has been viewed 877 times.