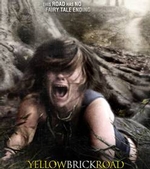 Bloody Disgusting and AMC Theatres have partnered up to showcase a new horror film every month at the AMC Universal City Walk and the AMC 30 @ The Block. During the month of June, they will be showcasing YELLOWBRICKROAD. This film is playing every Wednesday night at 10PM and Friday night at Midnight. Get your tickets for this limited engagement now.

In the Fall of 1940, the entire population of Friar, New Hampshire — all 572 of them — abandoned their homes, their possessions and their lives and walked up an ancient trail, never to be seen alive again. Their fates remained a mystery for over seventy years, until a team of researchers discover the trailhead and attempt to retrace the path the doomed citizens of Friar took. A few among them believe they will find something terrible in the forest. But it is the forest that will find something terrible in them. YELLOWBRICKROAD was an official Slamdance selection, and played at The Atlanta Film Festival and Screamfest to critical and audience acclaim, and won best feature at the New York Horror Film Festival.

Official Website
This event page has been viewed 978 times.