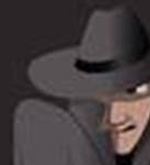 The Broadway theatre community is all atwitter. The musical comedy team of ‘Dodgers and Hammerfine’ is back with a new musical after a five year absence. Their last musical, “The Sound of Muskrats,” closed in previews because the infamous and Mysterious “Curtain Call Killer”, struck repeatedly at the end of every performance during (what else?) the curtain call. Will the killer strike again? Hint: it is a murder mystery comedy, so the answer would more than likely be a yes. You’re invited to dine with them and die laughing as they spoof everything theatrical.
Official Website
This event page has been viewed 814 times.