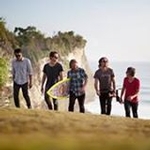 After early successes in the Christian rock scene, Switchfoot first gained mainstream recognition with the inclusion of four of their songs in the 2002 movie A Walk to Remember. This recognition led to their major label debut, The Beautiful Letdown, which was released in 2003 and included the hits "Ammunition" and "Meant to Live."

Official Website
This event page has been viewed 890 times.
bid=||