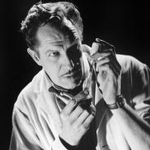 Just in time for Halloween, LACMA will screen six ghoulish classics back-to-back, all starring Tim Burton idol Vincent Price in honor of his centenary. Heir to a candy fortune, educated at Yale on art history and trained on the London stage, Price found his métier in fright features playing tormented masterminds and menacing lords. Starting with Andre de Doth’s House of Wax, in which Price plays an anguished sculptor with a ghastly secret, Price cemented his stature as a fixture of the macabre with Kurt Neumann’s still chilling The Fly. But, as David Thomson writes, Price “surveyed the horror genre as if it were a tray of eclairs.” Among Price’s gothic delicacies are several iconic Edgar Alan Poe adaptations directed by Roger Corman in lollipop colors and eye-filing CinemaScope and William Castle’s campy entertainment The Tingler. But there’s nothing funny about Price’s cold-blooded ruthlessness in cult film Witchfinder General, in which he stars as a small-town tyrant in 17th-century rural England.
Official Website
This event page has been viewed 728 times.
bid=||