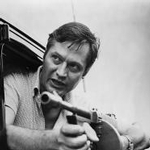 Roger Corman himself along with director Alex Stapleton will both be onhand at the screening of this documentary on Corman, "Corman's World: Exploits of a Hollywood Rebel." Corman’s World not only explores the producer-director’s vast body of work — over three hundred titles and counting — but also offers insight from both expected luminaries who flourished under Corman’s tutelage including Peter Fonda, Bruce Dern, Joe Dante, Ron Howard and Pam Grier to Corman graduates who seldom do interviews like Jack Nicholson, to name just one.
Official Website
This event page has been viewed 856 times.