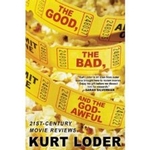 Millions grew up reading the author’s record reviews and watching him on MTV’s “The Week in Rock.” Now, the former Rolling Stone writer and MTV host discusses and signs "The Good, the Bad and the Godawful: 21st-Century Movie Reviews."
Official Website
This event page has been viewed 787 times.