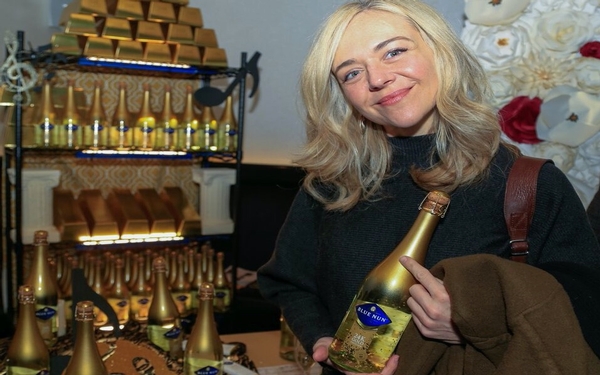 Nominees presenters and talent were wined and dined during the GBK Luxury Lounge at the eponymous Manhattan restaurant, Philippe by Philippe Chow, that has been a New York staple for an elegant yet lively night out in New York for the past twelve years. At the forefront of bringing elevated Beijing style cuisine to New York City, Chef Philippe is well known for his show-stopping dishes that are as lavish as they are delicious. Since opening, Philippe Chow has received top culinary accolades including "Best Peking Duck" from the New York Observer and "Best Chinese" by Zagat.  Attendees had their own “24 Karat Magic” moment upon arrival, with Blue Nun 24K Edition Sparkling Wine. This is a sparkling wine from Germany that is slightly sweet, very refreshing and contains real 24K gold flakes, is a favorite amongst the stars. It is produced by FW Langguth Erben, which is a family owned winery located in the Mosel region of Germany, headed today by 7th generation Patrick Langguth.

Other gifts included:  Vinci, founded by two MIT alumni in Sep. 2014, is a SIM-enabled standalone music player offers a seamless UI with integrated music services, voice and touch control, large local storage, high quality audio, 3D recording, fitness sensors, and an advanced recommendation algorithm.  Vinci gifted the Vinci 1.5, which is the World’s First Standalone Artificial Intelligence Headphones. Talent had the chance to meet Jazz Artist JC Stylles, who solely founded and trademarked JC Stylles Opulears, and gifted the Jazz Series, in Cherrywood, Executive Series in Walnut, and the Signature Series in Walnut. Pinnertest, a food intolerance testing company that can identify an individual’s food intolerance, was a huge hit in the lounge, offering at-home tests to assist in identifying food intolerances that may lead to weight gain, acne, bloating eczema, and psoriasis. The celebrities were excited by the new technology where there is no need to retrieve your phone from your purse or backpack. Pinn, LLC Bluetooth-enabled Pinn clips can be used anywhere and its easy-to-read LED display and powerful combined microphone/earbud keep you always-connected to your mobile phone’s key features, without having it seen.

Along with sought after electronics and gadgets, the talent's closets received some love. Amara Skye, the granddaughter of the legend, Whoopi Goldberg, had everyone smiling with her original paintings and painted jackets, described as urban trend with an edge. The artists chose from her collection of denim jackets silkscreened from hand-painted original artist’s designs.

Talent also received one-of-a-kind Nike Airforce 1's designed and hand illustrated by the artist, SohpDawg, herself, based on each recipient's personalities. Two Gypsea Souls added some vintage flare to lounge, gifting their hand made vintage flannels with artwork from bands such as Ed Sheeran, Fleetwood Mac and The Rolling Stones. Continuing with the music inspired art, handcrafted, modern bracelets made from used guitar strings donated by acclaimed musicians were gifted from Wear Your Music, who donates all proceeds to the artist charity of choice when sold online. Fortune & Frame is a New York City-based jewelry line known for its signature fortune lockets and fortune cookie pieces, gifted a variety of fortune lockets that hold fortunes, inspirational notes and other messages from the universe. Another NYC-based company, Remember Me Green, gifted the celebs an actual piece of the city, with Ecofriendly totes made from recycled New York City billboards.

After updating their wardrobe, talent was had the opportunity to take an delicious shot of the decadent Bouvery CV chocolate liquor, a luxurious dark chocolate vodka made with gluten free vodka and organic fair-trade cocoa. The Cup Bearer showcased their mixology skills with and their handcrafted cocktails including branded ice cubes and gold flakes accents, made especially for the Grammy’s celebration. The Cup Bearer gifted a mobile bar experience that includes a customized cocktail menu and service valued up to ten-thousand dollars. If cannabis was more their style, talent was introduced to The Trunk Company, which is the standard in luxury cannabis furnishing, defining style and innovation with the fusion genuine craftsmanship and timeless design.

Talent was ecstatic to be briefly taken away from the New York City cold and transported to Mexico as they learned about the two trips they were receiving. Hotel El Ganzo, is an Arts and Music inspired luxury boutique hotel located in San Jose, del Cabo, Mexico, and they gave guests a stay in an Ocean View Room and private deluxe airport transportation in San Jose del Cabo. Caribbean Living Magazine, the luxury travel magazine that takes readers beyond the beach, and their partner hotel, Palace Resorts, the “Awe Inclusive” resort experience with five-star all-inclusive, luxury properties throughout Mexico and the Caribbean, gifted a three-night, All-Inclusive stay in Cancun at The Grand at Moon Palace.  To help them get vacation ready, Lumisque was gifting their CO2Lift, which is a state of the art carboxy therapy treatment mask for the Face, Eyes, Neck and Hands that is clinically proven to Lift, Hydrate, & Rejuvenate your skin with immediate results and no downtime.

Guests had the opportunity to learn more about Gabrielle's Angel Foundation and Lé Metier de Beauté, a leader in technology-driven skin care and cosmetics with an emphasis on quality, craftsmanship and performance, offering a highly curated range of products that use pharmaceutical-level delivery systems to offer the best results imaginable. Lé Metier de Beauté has created a special limited-edition version of their best-selling Precision Liquid Eyeliner in Noir to benefit Gabrielle's Angel Foundation for Cancer Research. The innovative design of the soft quill-tipped applicator tip makes the eyeliner truly longwearing and easy to use, and the special purple packaging with angel wings highlights Le Metier's commitment to donating a portion of proceeds to the non-profit organization. FOCUS Youth Center, a holistically designed Arts and Education program for at-risk youth, including Parenting Intervention workshops and a Spiritual Center for the community to connect and find common ground, was also on site connecting celebrities to their local community efforts.