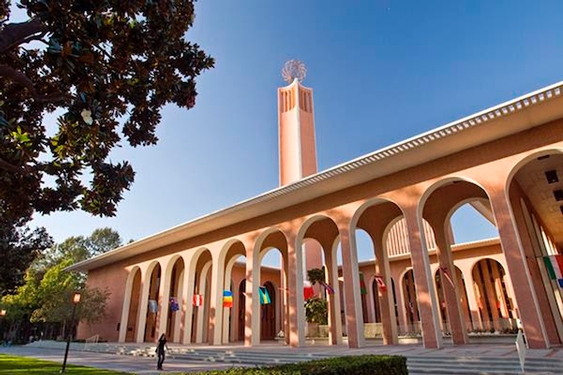 USC has removed the name of one of its former longtime presidents, Rufus Von KleinSmid, from a prominent campus building because of his active support of eugenics. (Philip Channing/USC)

The University of Southern California has removed the name of one of its former longtime presidents, Rufus Von KleinSmid, from a prominent campus building because his active support of eugenics is “at direct odds” with the university’s multicultural community and mission of diversity and inclusion, President Carol L. Folt announced Thursday.

The name, along with a bust of Von KleinSmid, was removed from the Center for International and Public Affairs building after the executive committee of the USC Board of Trustees unanimously approved the decision Wednesday.

Folt, in her letter to the campus community, said Von KleinSmid served as the university’s fifth president for 25 years and expanded research, academic programs, and curriculum in international relations. But his support of eugenics clashes with USC’s values today, she said.

“This moment is our Call to Action, a call to confront anti-Blackness and systemic racism, and unite as a diverse, equal, and inclusive university,” Folt wrote. “You have asked for actions, not rhetoric, and actions, now.”

On Thursday, tweets with the hashtag #VKCIsOverParty celebrating the change circulated among USC students after photos of the building without Von KleinSmid’s name were posted on the platform.

USC had failed to respond to years of demands from within the university and among community members to remove Von KleinSmid’s name from the campus building. They include Japanese Americans, who say Von KleinSmid prevented them from enrolling at USC after World War II, when tens of thousands were wrongly incarcerated after Japan’s 1941 attack on Pearl Harbor. USC professor George Sanchez documented such claims, according to the Daily Trojan.

But mass protests triggered by the death of George Floyd pushed USC to action. Folt said her office has been deluged with input from students, staff, faculty leadership, deans, alumni and neighbors.

Earlier this week, students began circulating an online petition calling for the renaming of the building. They launched a similar petition in 2018. And last September, just an hour before Folt was sworn in as USC president, the bust of Von KleinSmid was found with a rag over its face with the words “rename VKC” on it and a piece of cardboard with the word “NAZI” hung around its neck.

Last year, then-Provost Michael Quick announced the formation of a Nomenclature Task Force to address concerns regarding building names, symbols and monuments. The committee’s formation came after members of the Undergraduate Student Government had called for it a year before.

— Form a Community Advisory Board for the Department of Public Safety. The board will advise the university on best practices regarding safety, policing and community engagement. Racial and identity profiling, officer training, education, disciplinary matters, financial resources and partnerships with the Los Angeles Police Department are among issues that will be examined.

— Convene a new Task Force on Diversity, Equity and Inclusion. Folt said she will charge a new committee to identify structural and institutional processes that perpetuate racism and inequality. The committee will develop new initiatives, such as mandatory training programs on implicit bias and sensitivity, courses on racism, and community building. A 2015 committee formed by the provost did not implement some of the 20 recommended actions, she said.

— Hire a Chief Diversity, Equity and Inclusion Officer. USC hopes to select an officer for this new position by fall.

— Expand space and programming for underserved students. USC will open new student spaces in the fall on two floors of the Student Union to better serve underrepresented students. The university will also launch a program to provide support and resources for students who are undocumented, along with those who are the first in their families to attend college. Plans are underway to provide more space and programming for students who are Black, Asian Pacific American, Latino, Native American, Middle Eastern, LGBTQ+ and veterans, and former foster youths.