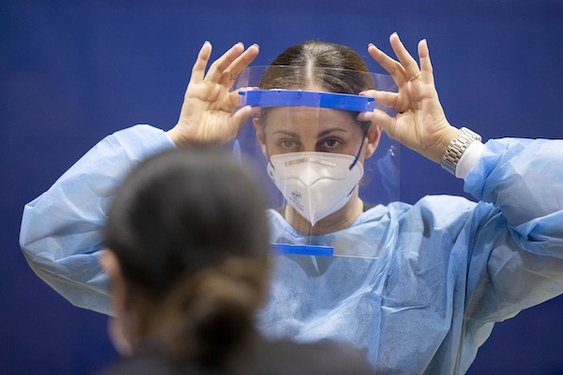 Arlene Colom, a nurse from Premier Family Health, adjusts her PPE as she waits for a patient to test for COVID-19 in Wellington, May 13, 2020. (Allen Eyesstone/Palm Beach Post/TNS)

The document confirms the fears of nurses and other health care providers. After months of pressure on federal officials to use wartime powers to mobilize U.S. plants, the document’s slides show that domestic manufacturing of gowns and surgical masks has ticked up by a few thousand per month since the pandemic hit, falling far short of need. The United States still does not manufacture any nitrile rubber gloves.

Five months after the pandemic first hit U.S. shores — and after weeks of lockdown and economic collapse to prepare for a surge of cases — critical personal protective equipment such as surgical gowns and masks continues to face a national shortage.

The slides show FEMA’s plan to ramp up supply into June and July hinges on the reusing of N95 masks and surgical gowns, increasing the risk of contamination. Those are supposed to be disposed of after one use.

The plan to reuse supplies will likely rile many nurses, who have raised safety concerns. Hundreds of health care workers have died from COVID-19, according to the Centers for Disease Control and Prevention.

The internal slides were given to the Senate Homeland Security and Governmental Affairs Committee on Friday night ahead of a hearing Tuesday on inadequate distribution of supplies. Sen. Maggie Hassan, D-N.H., demanded the slides be made public Tuesday.

The slides do not include independent purchases by states, commercial donations, small distributors and direct shipments from manufacturers. FEMA also anticipates a surge of face shields from “nontraditional” suppliers like car and plane manufacturers that will more than meet demand.

Hassan, questioning FEMA Administrator Peter T. Gaynor at the hearing, accused the agency of dodging questions about how many N95 masks and other protective equipment will be needed throughout the duration of the pandemic.

She said it took “over a month of pressure” from the committee to learn the agency’s projections about U.S. needs for PPE. Hassan said FEMA staff initially told her they were confidential.

“Administrator Gaynor, why is the agency refusing to make these documents public? Public scrutiny is critical to evaluate these projections: how they were developed, (and) whether they account for real needs in nursing homes, hospitals, schools and businesses,” she said.

Gaynor replied they should be released.

Gaynor said the projections were difficult to create because officials had to take into account the demand for PPE from people who don’t typically wear it such as business owners and corrections officers, not just hospital workers.

“Early on, we wanted to understand what usage was, what pre-COVID numbers looked like. Now that we’re going into opening government, what do those numbers look like? Elective surgeries, dentists, all these things are new and additive to the problem,” Gaynor said. “So as we learn more, we’ll update those slides.”

Even as FEMA has mobilized to increase PPE supplies, it’s been dogged by criticism, especially for raiding and redirecting state-purchased supplies and for not providing details about how it determines which hospitals and nursing homes get priority. For weeks into the pandemic, FEMA distributed stockpile equipment to states and cities based in part on per capita population rather than the severity of the disease’s spread.

Republicans were more eager than Democrats to praise the federal response to the supply crisis, but the criticism was bipartisan.

The slides show the projections anticipated a decline in demand from hospitals. For example, the slides show FEMA expected less demand for surgical masks from June to July.

The predictions are also based on “interagency analyses, industry estimates and historical data,” the document states.

When asked about domestic manufacturing, Polowczyk said, “It’s starting to ramp up.”

FEMA anticipates an increase in the supply of N95 respirator masks in the fall as contracts funded through pandemic relief laws cleared by Congress in March and April are fulfilled.

Polowczyk added that the government is asking textile manufacturers to make nondisposable gowns.

The U.S. can manufacture an additional 10,000 to 15,000 more gowns per month today compared to January, the slides show. Some hospitals are using as many as 1,000 gowns per day, according to a March survey about supply shortages.

Polowczyk said there is a “forthcoming (Defense Production Act) action” on gloves.

The pressure to reuse personal protective equipment has disturbed nurses across the country. The news that FEMA plans to meet demand by manufacturing cloth gowns and “decontaminating” N95 respirators is sure to stoke concerns.

“Fluid impermeable gowns are an important part of the overall personal protective equipment ensemble. We must protect our health care workers, and if there is concern that our nation’s health facilities do not have enough disposable, impermeable gowns, the presidential administration needs to use the Defense Production Act to direct our manufacturing industries to immediately make them, in addition to the N95 respirator masks and other PPE gear we also need to fight this virus for the long term,” Zenei Cortez, president of National Nurses United, said in a statement after the FDA deregulated the use of cloth gowns in medical settings in April.

NNU, the largest nurses’ union in the U.S., also raised concerns that there isn’t enough research yet to support the decontamination method authorized by the FDA in April for N95 reuse and has expressed numerous health concerns about the process.

The Food and Drug Administration also issued a safety alert last week that N95 respirators imported from China should not be decontaminated and reused.

The hearing was meant to draw lessons from the first harried months of the pandemic, but lessons were slow to materialize.

“Where was the problem and how do we avoid it in the future?” asked Sen. Mitt Romney, R-Utah, but he did not get much of an answer from the Trump administration officials on the panel, who referred questions to HHS.