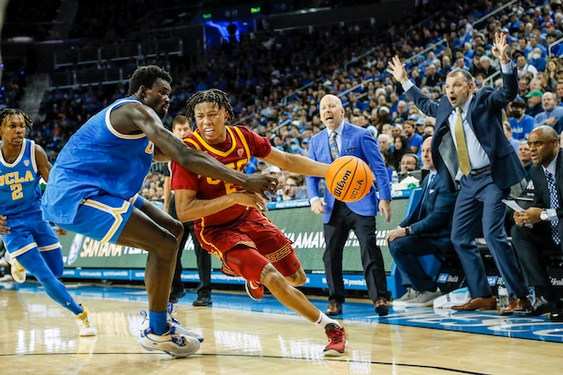 If at first you don’t succeed, get the ball back in the hands of Jaylen Clark.

With his team on the verge of an epic collapse in the final minute against its archrival, badly outplayed in the second half, the UCLA junior guard found himself open for a three-pointer.

As Clark’s shot caromed off the rim, the Bruins trailed by two points with 19 seconds left and the sellout Pauley Pavilion crowd grew uneasy at the prospect of the home team dropping a game that it once led by 18 points.

The Bruins would get one more shot at redemption courtesy of senior guard David Singleton, who snatched the rebound and immediately fed Clark for another open look from beyond the three-point arc. Without hesitation, Clark rose for another try.

“I normally don’t miss two in a row,” Clark said.

That held true again, Clark’s second shot falling through the net to send the celebrity-packed crowd into a frenzy with his Bruins once again holding a lead. Tenth-ranked UCLA held on for a 60-58 victory over USC after Boogie Ellis’ baseline jumper at the buzzer was off the mark, allowing the Bruins to exhale.

“We lucked out and got up out of here with a win,” said Clark, who led the Bruins with 15 points, “but not a performance we’re really proud of.”

Going small in the second half while relying on a swarming defense, the Trojans furiously rallied thanks in large part to the efforts of sixth man Reese Dixon-Waters, whose 12 points in the second half matched UCLA’s total before Clark made his three-pointer.

Given another chance, USC’s Boogie Ellis was called for an illegal screen on Clark with seven seconds left, doubling down on disappointment after Ellis had missed a box-out on Singleton’s rebound. The Trojans then quickly fouled Singleton, who converted one of two free throws with six seconds left to extend his team’s advantage to two points before Ellis’ final shot came up short.

UCLA coach Mick Cronin was clearly irritated afterward by his team’s massive letdown, saying only that he told Clark it took guts to take the last shot before turning over the postgame address to assistant coach Rod Palmer.

Dixon-Waters finished with 16 points for the Trojans (11-5, 3-2), who put together a ferocious rally after trailing 44-26 at halftime.

“It was embarrassing in the first half,” USC coach Andy Enfield said. “It embarrassed me as a head coach. To come out in a rivalry game and be down 18 at halftime, to give the effort we gave, it was embarrassing for all of us.”

USC arrived at the home of its crosstown rival needing a significant boost for its NCAA tournament resume. Having logged one quality victory (Auburn) and one horrid loss (Florida Gulf Coast), the Trojans probably need to at least split their four games against UCLA and Arizona to feel good about their postseason chances going into the conference tournament.

For UCLA, the stakes were no less significant. Projected as high as a No. 2 seed in some mock NCAA tournament brackets, the Bruins would savor moving up to a No. 1 seed for the first time since 2008, when they made the last of three consecutive appearances in the Final Four.

A large throng of UCLA students who had waited hours in the rain earlier in the day showed up early, wearing blue giveaway “We Run LA” T-shirts. Predictably, they booed the Trojans when they took the court and razzed guard Kobe Johnson after he badly missed a three-pointer in the game’s opening minutes.

Playing its third consecutive game without injured freshman guard Amari Bailey, the Bruins once again turned to Singleton as a starter and built an 18-point halftime lead despite being outshot 44% to 41.7% because they dominated in every other facet. UCLA outrebounded the Trojans by nine, committed four fewer turnovers and made five more three-pointers.

The Bruins were also tougher, Clark hounding Drew Peterson into two turnovers and holding the Trojans to only one offensive rebound in the first half on their 14 missed shots. The frustration appeared to boil over for Peterson late in the first half. After making a three-pointer, he earned a technical foul for saying something on his way back down the court.

The Trojans would nearly come all the way back before Clark once again stopped them. 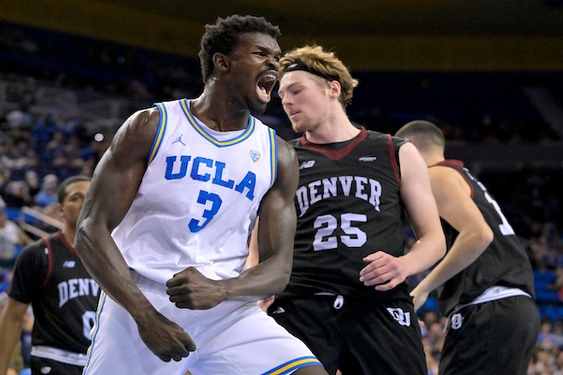 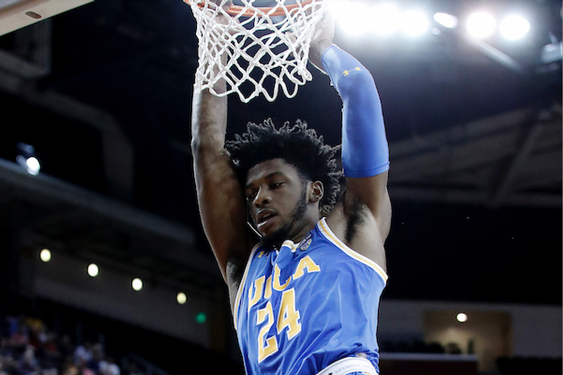