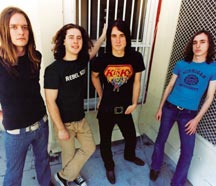 Sitting poolside within steps of their hotel room amongst a gaggle of retirees in town for an Audrey Hepburn convention, the four men known as the Datsuns seem a bit tired. It’s their day off, but that only means that they aren’t performing or traveling. The press is still on.

The Datsuns’ music is hard, fast, and loud——a potent mix of ‘70s guitar heroics and early ‘80s swagger. Yet they aren’t just another derivative rock revival band. They bring a disarming lack of pretense and shun the gaudiness that stilted the genre. The four friends, all from the small township of Cambridge, New Zealand, are polite and mild-mannered on this afternoon. Dolf, the lead singer and bassist, rubs his eyes, half tired, half annoyed at the line of questioning. His answers are articulate and forthright, but don’t hide the fact that he longs for the day he won’t have to explain or defend his band’s music and the music of their peers to anyone. Phil, one of the band’s two guitarists, is all sweetness and sincerity as he confesses to baking for his band mates in their early days. The other guitarist, Christian, seems to be the most comfortable discussing what the Datsuns are trying to accomplish, and is easy and light in his conversation. As for Matt, the drummer is quietly content to just sit back and listen in the mild Southern California sun.

They are quick to defend any criticism, real or anticipated as it were, of their music when the conversation turns to the lyrical content of present day rock music. When asked if they thought music was superceding the importance of lyric, Dolf quickly disagreed, offering The White Stripes as an example, "Do you consider The White Stripes part of the rock revival? Have you listened to their lyrics? They have some incredible songs." Christian tried to elaborate as to their own process: "I don’t think it is a matter of one being more important than the other. They all come together at one time, and the song becomes what is important." A number of the tracks on their album were fully formed long before they were recorded, and making the album was simply an exercise on how to capture in the studio the way they sounded on stage.

Any mention of the individual traits each member brings to the band (not counting their instruments) is shrugged off by everyone, it having been agreed upon that their music is a distinctly collective creation. Yet Phil does volunteer that he brought homemade cookies, and on one momentous occasion, fudge, to their early rehearsals. In one of his two comments, Matt whispered that he continues to bring the drums.

Nothing could be further than the composed and genial manner I experienced during their interview than their antics on stage the following night at the Troubadour. The Datsuns are beyond charismatic and universally entertaining in a live setting. How odd for a band that has caused calamity in Britain and elsewhere to face an industry crowd that despite all efforts refuses to be moved by anything. But faced with such a challenge, The Datsuns claim victory as well; rather than kowtow to their stone-faced L.A. audience, the band simply dug in and performed their set as always, giving in to neither label nor social pressure.

Phil had stated their purpose perfectly the day before when asked where they might like to go with their music, "Well, tomorrow I’d like to go to the Troubadour and play." And play they did.