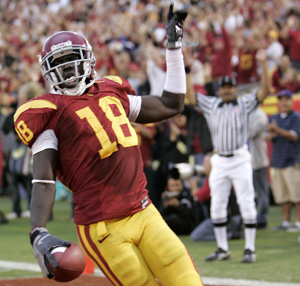 It is never easy to pick a side in a Civil War.

While the Trojans (8-3, 5-3) are certainly happy they won their own “Civil War” against UCLA last weekend at the Coliseum, who should USC root for as Oregon State takes on Oregon Thursday night in one of the coolest nicknamed rivalry games in the country?

An Oregon (9-2, 7-1) victory means they win the Pac-10 title outright, giving USC a chance to force a three-way tie for second place. However, an Oregon State (8-3, 6-2) victory eliminates Oregon from the Rose Bowl and means the Trojans can do no better than third place in the Pac-10.

Of course, USC would have to defeat Arizona (7-4, 5-3) this Saturday and hope that both Oregon and Washington (4-7, 3-5) win out, but the Trojans cannot be happy about the prospects of hoping for, at best, a three-way tie for second place and a Holiday Bowl berth – and a 28-7 win over UCLA is not strong enough a tonic to make up for an otherwise disappointing season.

Alas, the Trojans must be happy their “ugly” home victory over UCLA did not translate into a dropping in the polls. Despite 12 penalties (107 yards) against the Bruins (6-6, 3-6) and a lackluster offense that scored its first non-turnover-induced touchdown in the fourth quarter, USC managed to move up two spots to No. 18 in the BCS Poll.

While it will have no impact on a bowl game, final polls or overall standings, there should probably be an independent poll asking fans to determine the level of classlessness demonstrated by both coaches Rick Neuheisel (calling a timeout after a knee) and Pete Carroll (subsequently play-calling a rub-it-in-your-face 48-yard touchdown pass with 44 seconds remaining despite a 21-7 lead).

If anything, the wide-angled shots of the entire UCLA bench halfway across the field and ready to go toe-to-toe with the Trojans in a non-football setting definitely demonstrates the Pac-10 has some grit.

Football
Welcome back, Super Bowl. L.A. is where you belong
740 views