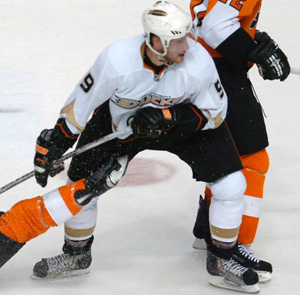 If the Los Angeles Kings had anything to be thankful for this past holiday weekend, it was that the NHL schedule-makers kept the team within the state of California Nov. 28 and Dec. 12. During the two-week stretch, the Kings play eight games without leaving the state, including seven in Southern California – perfect timing, considering how beautiful the weather has been in the L.A area during these final few weeks of autumn.

The Kings certainly are starting to show their appreciation with results on the ice, starting off the eight-game stretch with a 2-1 shootout victory over the Chicago Blackhawks last Saturday in front of a Staples Center crowd of 18,118. The win put the Kings in second place in the Pacific Division; with a record of 15-10-2 (32 points), Los Angeles is barely in front of the Dallas Stars (12-8-7, 31 points) and Phoenix Coyotes (15-11-1, 31 points) and trails the league-leading San Jose Sharks (18-6-4, 40 points).

With the favorable all-California venue schedule during the next seven games, the Kings hope to solidify their record and inch closer to the Sharks before seven of nine games after Dec. 14 away from Staples Center.

Anze Kopitar and Jonathan Quick have kept the Kings relevant in the Western Conference; Kopitar’s 33 points (14 goals, 19 assists) places him third in league scoring, while Quick’s 14 wins are two shy of the league high.

Meanwhile, the Anaheim Ducks were certainly thankful to the schedule-makers for blessing the team with a seven-game homestand that started on Nov. 19. So far during the homestand, the Ducks have won four of six to improve to 10-11-4 (24 points). Yet with the two home losses at the hands of division rivals San Jose and Phoenix, the Ducks are not doing much to dig themselves out of the division’s basement.